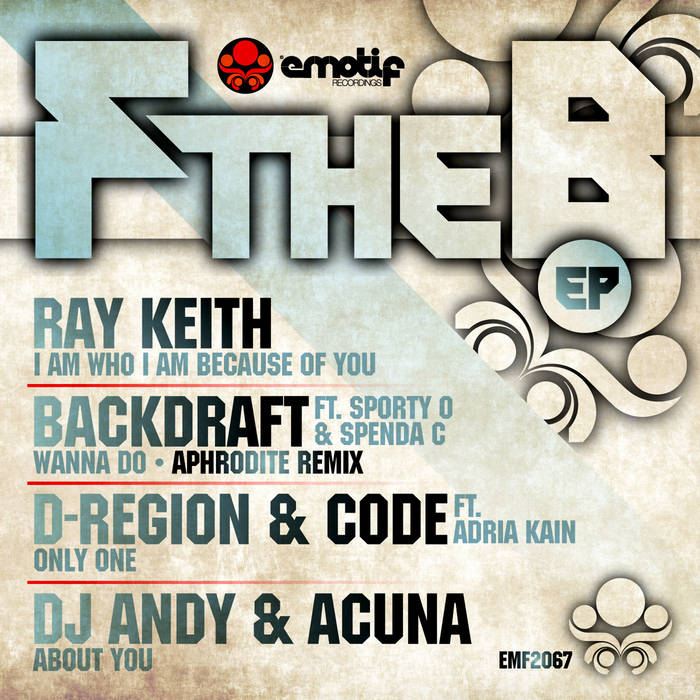 On the 8th December Emotif Recordings delivers ‘F The B EP’, including tracks from jungle legends Ray Keith and Aphrodite and current label favourites D-Region & Code.

As pioneers of drum and bass from the earliest days, London-based EMOTIF are proud to revisit their roots.
Kicking things off is Ray Keith’s I Am Who I Am Because Of You, a dub-influenced track flecked with dancehall sound effects and a jungle bass line that hints at the kind of work this artist is most famous for. The vocal samples and the intro, however, give a tantalising insight into what Ray is capable of producing these days.
We progress with Aphrodite’s remix of Backdraft’s grimey hiphop track Wanna Do feat. Sporty O and Spenda C: another blend of an old master with a fresh sound. 90s legend Aphrodite needs no introduction and his remix of this bass laced trap anthem is a choppy jungle number guaranteed to get people moving.

The next track comes from London/Toronto based drum and bass producers D-Region and Code. Who are known for their work respectively in Canada and on London’s Kool FM. Following the well regarded recent release “Re-Evolution”, the futuristic Only One is full of sci fi sounds and trance synths and showcases the producing talent of this exciting, up and coming D&B duo. They are joined once more by the vocal talent of R&B singer Adria Kain who also graced their 2013 single “Fly Away”. Brazilian DJ Andy returns to Emotif to collaborate with Acuna. They close this EP with the smooth, progressive D&B track About You which utilises the sort of crisp handclap sounds usually reserved for house beats with a bass line to die for, that rounds this selection off perfectly.

F the B is available online from 8th December. Keep an eye out for more classic sounds from Emotif on their website www.emotifrecordings.com